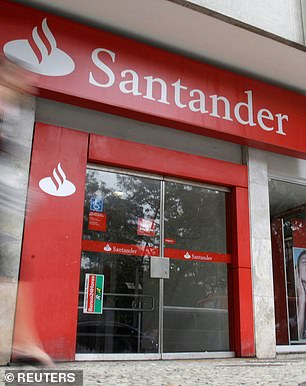 Santander has contacted more than a million customers who are at risk of falling behind with their bills as the cost of living comes under pressure.

The highly unusual move by the High Street Bank is in response to a deteriorating economic outlook and a cost of living crisis which has left many households struggling to make ends meet.

Lenders fear they will have to pay billions of pounds in loan losses if cash-strapped borrowers cannot afford to repay their debts.

Last week the Bank of England warned that Britain faced a long recession and runaway inflation as the central bank raised interest rates by 0.5 percentage points – the biggest increase in 27 years – at 1.75%.

The Bank’s bleak outlook also predicts that real household incomes will fall for two straight years, the first time this has happened since records began.

Santander has reached out to its customers to offer a helping hand as inflation is expected to hit 13% this winter.

It targeted personal account holders who spend a large portion of their income on energy or use credit cards to withdraw cash or pay essential bills.

He contacts clients whose current account balances are decreasing every month and are at risk of falling into the red.

The bank has been in contact with around 150,000 corporate clients and all businesses that have taken out a Bounce Back loan during the pandemic that has not been repaid, directing them to the government’s Pay as You Grow repayment scheme.

The program helps companies that are struggling to meet their repayments by extending the term of loans from six to ten years.

Santander is the second bank to set out a substantial action plan. NatWest, one of the UK’s largest lenders, has already contacted 2.7 million customers this year.

These were selected because they have a basic bank account, have low incomes or have utility bills representing more than 10% of their income.

Messages include advice on budgeting and savings. NatWest’s 800,000 corporate clients have received emails or letters.

NatWest chief executive Alison Rose said: ‘We know that the continuing rise in the cost of living is impacting people, families and businesses across the UK, and we have put in place a series of targeted measures to support those who are likely to need it most.’

Average spending on utilities, food and mortgage payments is expected to rise by £4,610 by the end of the year, according to the Center for Economic and Business Research.

The increase will be driven by an expected rise in the energy price cap in October to £3,359, according to forecasts from analysts at energy consultancy Cornwall Insight.

Lloyds, Britain’s biggest mortgage lender, said it had consolidated the debts of 51,000 customers into a “single, more manageable loan”.

Last week Nationwide, Britain’s biggest construction society with 16million members, set up a free hotline for customers seeking assistance. “We expect members using the service to increase steadily over the coming weeks,” a Nationwide spokesperson said. Other major banks contacted by The Mail on Sunday declined to give details of any action they might take.

Along with higher utility bills, millions of homeowners are expected to face higher mortgage payments in the coming months after the rate hike.

About two million people have standard variable rate home loans or trailing mortgages, with repayment charges directly linked to the Bank of England’s base rate.

Mortgage lenders such as Barclays have started to increase standard variable rate mortgages by 0.5 percentage points, which will have an immediate impact on these borrowers.

Fixed rate mortgage customers are protected against immediate rate changes. However, about 40% of them are due to expire within the next year.

A recent MoneySupermarket survey found almost a quarter of over-65s had no savings to help them cope with the cost of living crisis, with a further 22% holding less than £2,000 at the bank. And nearly half of those under 25 had no savings either.

There are signs that households are increasingly drawing on savings accumulated during the pandemic to finance their daily expenses.